An Ancestral Diet and its Impact on Metabolic Disease

With estimates that 29 million American adults have diabetes, 30 million children, and a third of adult Americans having pre-diabetes, it is likely that we all know somebody living with diabetes. Now, diabetes is a name for a condition that finds itself on the far end of the spectrum of what I just commonly call metabolic conditions. So what’s that mean? The hallmark of these metabolic conditions is insulin resistance. Increasing insulin resistance overtime leads to the extreme complication we call diabetes. Insulin is a hormone, secreted by the pancreas, that signals to the cells of the body that glucose, blood sugar, is on its way. When everything is working properly, the cells send a glucose transporter to the cell membrane and as glucose makes its way around, they gobble it up. When it isn’t working well we wind up with high levels of insulin in the body, and high levels of blood sugar. This leads to a whole slew of problems.1

Diabetes is but a name for a condition that finds itself on a spectrum of metabolic conditions.

Some other conditions that fall on that spectrum are overweight, obesity, prediabetes, and metabolic syndrome. Luckily, there is something that can be done about it. 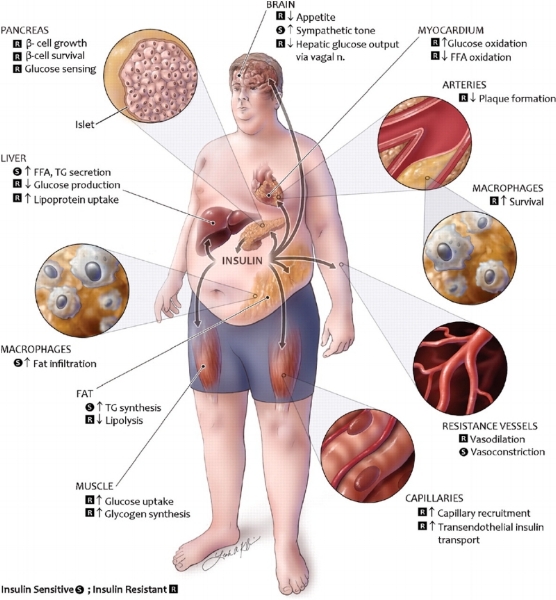 The CDC estimates that with a structured nutrition and lifestyle program, the risk of developing type II diabetes can be cut by as much as 58%. That’s great news.

Ever since Paleo, or an ancestral approach to living, has come on the scene there has been a lot of speculation and skepticism as to whether or not the hypothesis that it stands on holds validity. The hypothesis is that our current way of living and eating are out of sync with the genetics that it developed over the previous 250,000+ years, and that resultantly what we are seeing is an epidemic of chronic lifestyle generated diseases. In the last decade or so, a slew of scientist has started to take to the lab to discover whether or not that hypothesis stands up to its claim. Turns out it does in regards of these metabolic conditions.

One study done in 2009 compared the impact of a Paleolithic diet versus a generally recommended diabetes diet on cardiovascular risk factors in 13 patients with type II diabetes. The results showed that while patients were adhering to a Paleolithic diet they saw a reduction in markers of elevated blood sugar, triglycerides, measures of hypertension, weight, body mass index, and waist circumference. Furthermore, while on the Paleo diet they also saw an increase in HDL (the good cholesterol), and a lessening of insulin resistance – the hallmark of these metabolic conditions. The Paleo diet far exceeded the generally recommended diabetic diet in its impact. During the time of the diabetic diet the patients only saw an improvement in BMI, waist circumference, and their insulin sensitivity.2

Another study done in 2015 compared a Paleo diet with the recommended diet from the American Diabetes Association. This study found that the Paleo group saw significant reductions in total cholesterol with triglyceride’s also trending down . Also, the Paleo group saw a greater reduction in markers of blood sugar and improvements in glycemic control. Additionally, those that were the most insulin resistant at baseline saw the greatest improvement on the Paleo diet.3

From the results of these two studies alone we can see that the impact of an ancestral diet on overall health is huge. In conjunction with all these measures of blood sugar and insulin resistance, we also see a dramatic reduction in the markers of cardiovascular disease, which is another condition that plagues this country in epidemic proportions.

In the recent past a new diagnoses has made its way onto the scene, that of metabolic syndrome (MetS). A diagnosis of MetS identifies a group of people who are at higher risk for developing cardiovascular disease and type II diabetes. MetS is diagnosed by having at least three of the following markers; a central obesity of greater than 40 inches for men or 35 inches for a women, fasting glucose >100mg/dL,  triglycerides >150mg/dL, dyslipidemia, and hypertension.4 It’s easy to see that the ancestral diet makes a marked impact on all of these markers, but if it’s not enough to infer, there have been some studies done to see.

One study took 18 people who had at least three of the qualifiers for MetS and placed them on a Paleo diet. It took 14 people who qualified for MetS as a control and didn’t change their diets at all. Not surprisingly, those on the Paleo diet saw a reduction in overall blood pressure, total cholesterol and triglycerides, and an increase in HDL. Only those in the Paleo group saw a reduction in their waist circumference, and markers of blood sugar regulation. This means that many of the participants that were placed in the Paleo group no longer qualified for the criteria of diagnosis for MetS. But, here is the kicker, IT ONLY TOOK TWO WEEKS!5

In Just Two Weeks on an Ancestral Diet Subjects No Longer Fit the Criteria for Metabolic Syndrome!

Finally, a study comparing  the satiating, or filling, quality of the Paleo diet versus that of the Mediterranean diet. The participants were 29 men with ischemic heart disease and blood sugar dysregulation or type II diabetes. Subjective markers and leptin levels were used to gauge satiety. Leptin is a hormone secreted by fat cells that regulates hunger. High levels insinuate leptin resistance. The results showed that the Paleo group consumed significantly less energy daily, without being instructed to, and they tended to consume food of less caloric density, not necessarily less nutrient density. The Paleo group didn’t experience hunger and reported no difference in the experience of satiety then that of the participants on the Mediterranean diet. However, it is obvious that if they were eating fewer calories and experiencing the same level of fullness, the make up of the Paleo diet is more satiating. Leptin levels decreased by 31% in the Paleo group, almost double that from what was seen in the Mediterranean group of 18%. With the exclusion of one participate in the Paleo group who ate cereal grains like those in the Mediterranean group, the difference in reduction of leptin levels is statistically significant. Thus, not only does an ancestral diet improve insulin sensitivity, it also improves leptin sensitivity and resistance.6

An ancestral diet’s impact on markers of blood sugar dysregulation, obesity, and markers of cardiovascular disease as compared to typically recommended diets:

It’s easy to see that the ancestral diet has major implications as a therapeutic intervention and an ability to sustain overall wellness. Furthermore, it seems that it has a greater impact on metabolic conditions than the types of interventions that those, supposedly, “in the know” have recommended for the past several decades. It’s sad that this is the case, but it’s great to see that the science and field is moving in a more effective direction. At Resilient Roots an ancestral diet is but one facet of how we approach dealing with any individual. In combination with other lifestyle interventions the opportunity for healing and growth is quite dramatic.